Julia joined Shepherds the Vets in August 2016 as the Practice Manager. Julia has spent the last 20 years working in the financial services sector at a management level, both at national and international roles. She decided to make a career change joining Shepherds. She says “I am delighted I made the decision to join shepherds. My current priorities are to work with the team to ensure we delivered a gold standard of care to all our patients at all times”.

In her spare time, she loves to travel, read and enjoys spending time with family and friends.

Marina has worked at Shepherds since 1993, starting as a part-time receptionist and now as the Practice Coordinator.

Outside of work she loves spending time with her grandchildren, watching rugby and going on holidays.

TJ joined the team in January 2018 and assumed the newly formed post of Maintenance Manager, where is he now responsible for the general maintenance of the buildings along with managing the servicing of the equipment used in the practice.

John joined the team in November after leaving Tythegston Boarding Kennels. He has taken up the role of Stock Manager.

Outside of work John can be found on hockey pitches around Wales and South West England playing for Bridgend Hockey Club, walking his dog or entertaining his two daughters.

After working 11 years as a hairdresser Emma decided to change career and is looking forward to new challenges she will face. Emma loves animals and has her own cocker spaniel named Dino who is four years old. In Emma’s spare time she enjoys going on long walks with Dino. 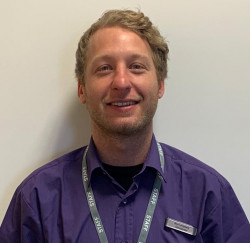 Bryn joined our team in 2021 amidst the global pandemic.

He grew up in the countryside of Central East Australia, a land of red dirt, sugar cane, & beaches and has seen his fair share of the Aussie wildlife.

He then moved to Melbourne once he became an adult & after spending 7 years working in various customer focussed roles, decided it was time to "fly the coup" and see what life was like abroad.

He is now enjoying his new life in Wales and one day soon hopes to have his own big furry canine companion to take with him camping, hiking & exploring new places.